I can't believe Baby Girl is already 7 months old!  I've decided that she's growing up a little too fast!

She now has 4 teeth...the top 2 middle ones are peeking through, in addition to her bottom 2 that she got back when she was 4 months old.  She can sit up on her own pretty well now, although she occasionally still topples over & gets a little irritated.  She's also still working really hard to crawl...but she still just gets on her hands & knees and rocks back and forth.  This past week she has apparently figured out that she can "talk" very loudly, so at times she will just sit and make all sorts of funny noises at the top of her lungs.  She thinks it's hilarious & it cracks me up!  It is so much fun to watch her change & learn new things!

The most exciting development (for Matt and me, at least) is her decision to start sleeping through the night!  Just after she turned 6 months old, and had not come close to sleeping through the night, this momma decided that she couldn't take it anymore!  6 months of not getting more than 3 or 4 hours of sleep at a time was really starting to take its toll...call me a wimp, but I need my sleep!  I knew that she was old enough to sleep a long stretch without eating, but with all of the traveling that we were doing, and Matt being gone so much for work, it had just been easier up to that point to feed her when she woke up because she would quickly go back to sleep without a fight.  I knew that training her to sleep through the night would possibly cause us to get less sleep at first, so that had me a little nervous, since I already felt like I never slept!  Anyway, a couple of people recommended the book The Sleep Lady's Good Night, Sleep Tight, so after Christmas Matt & I were both going to be in the same place for a week or two, so we thought we would give it a try.  I liked this book for a couple of reasons: 1) It was a quick read & had sleep training advice broken down into months, so you could skip to the part for the age of your baby, and 2)It was a "less tears" approach to sleep training than the strict "cry-it-out" methods.  Again, call me a wimp, but the thought of closing the door & letting her scream had my stomach in knots.  All of the nervousness and stress over the thought of "sleep training" was apparently for not...it only took us about 3 days & she was sleeping all night.  In those 3 days she would wake up just a couple of times & Matt would go in (if I went in she would get too mad because she wanted to eat & knew I had the food) and "shh" her and pat her and she would fall back asleep in just a few minutes!  Since then we have been getting hours of uninterrupted sleep & I'm starting to feel more human and less zombie-like!  We have had a few "set-backs" in the sleeping all night realm (her recent teething episode & a trip to Colorado), but overall I am so thankful that we finally broke down & convinced her to sleep all night.  I didn't intend to ramble on & on about sleeping, but clearly it was a big deal for me!

Now for the real reason anyone reads this blog...pictures of that sweet baby girl!  First, some of her 7 month pictures.  I love all the cute expressions she makes these days! 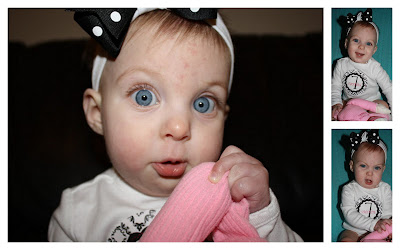 Then, I thought I would give you a look back at the last 7 months of pictures, just so you can see how much she has changed! 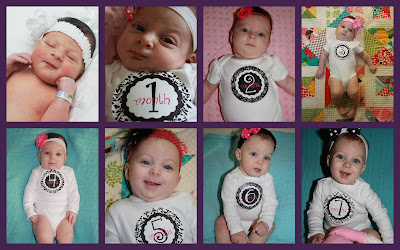 I'm a little late with this post, but Adley's first Christmas was so much fun!  We had several different celebrations that stretched over a couple of weeks.  Of course, she wasn't spoiled one bit!  She just has enough new toys and presents to last her quite a long time! 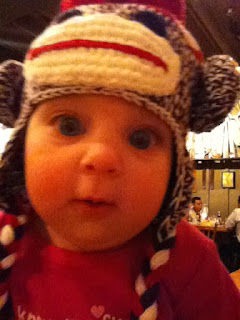 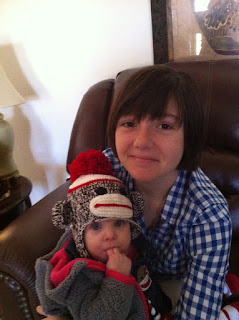 Our first Christmas celebration was two weekends before Christmas in Broken Arrow with Matt's family.  We had a nice, relaxing weekend where we enjoyed finger foods, unwrapping gifts & going to see some Christmas lights.  Adley was completely mesmerized by all the lights! 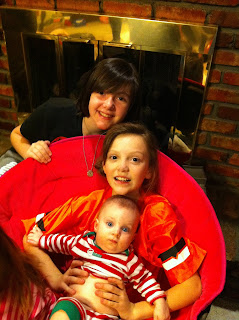 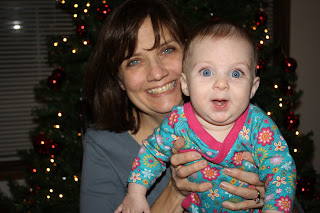 Christmas in Duncan was the following weekend with my mom's side of the family, and then we celebrated on Christmas morning with my immediate family, and later in the day with my dad's family.  We certainly don't skimp on the Christmas celebrations! 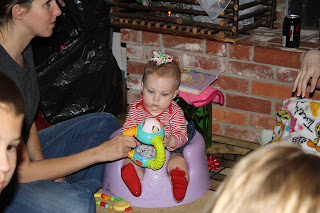 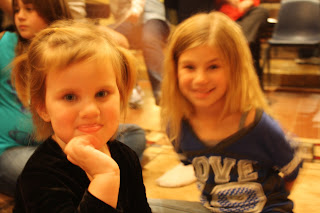 Although Adley certainly enjoys playing with all of her toys & reading her new books, she was really  more interested in the bows and tissue paper while we were unwrapping presents.  I'm sure she'll be right in the middle of everything next Christmas! 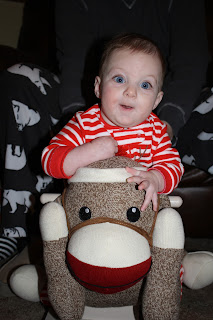 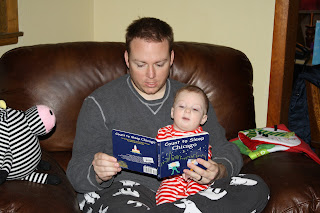 Christmas has always been my favorite holiday.  I'm sure it's due to the beautiful decorations at my parents' house, and all the fun celebrations that we have with family and friends around the holidays. And I love cold weather, so that's just an added bonus!  But, celebrating Christmas this year with Adley was by far more exciting than any Christmas in the past! 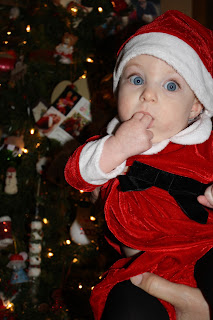 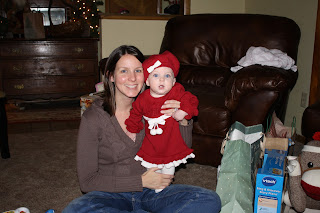 I get a daily email from Finding Joy that always has an encouraging thought, especially for stay at home moms.  Every Friday she posts her "Favorite Things" from the week, which is her way of recognizing the everyday things she is grateful for.  I thought I would give it a go today.

Here are a few things I'm thankful for this week:

1. This sleepy baby who slept most of the way home on our flights from Colorado on Sunday. 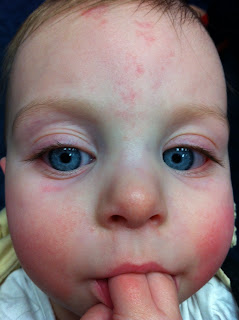 3. My sweet girl trying so hard to crawl and sit up on her own. 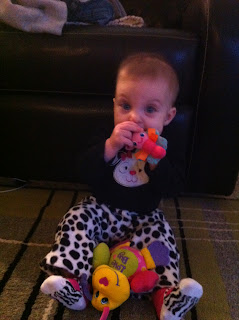 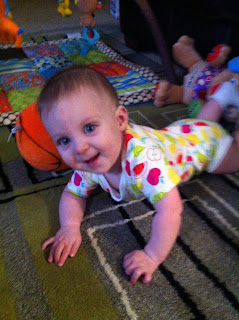 4. A nice, relaxing week at home.  After all our travels over the past few months, and moving yet again, it was a welcome change to just spend the week in one place with our little family.

I hope you all enjoy your weekend! 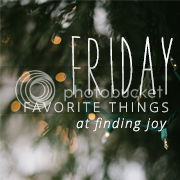